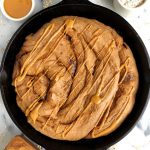 Store extras on the counter for a couple days then in the fridge for up to a week! You can also freeze and warm up when you’d like to eat!