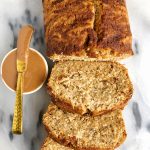 Vegan Cinnamon Roll Banana Bread made with all gluten-free and nut-free ingredients for an easy banana bread recipe with a cinnamon roll twist!

*Store leftovers in airtight container for 3 days, fridge for 5 days or freezer for 2 months