We are Pregnant! Journey to Baby #3!

We are Pregnant! Journey to Baby #3 with fertility treatment and the unexpected twist. 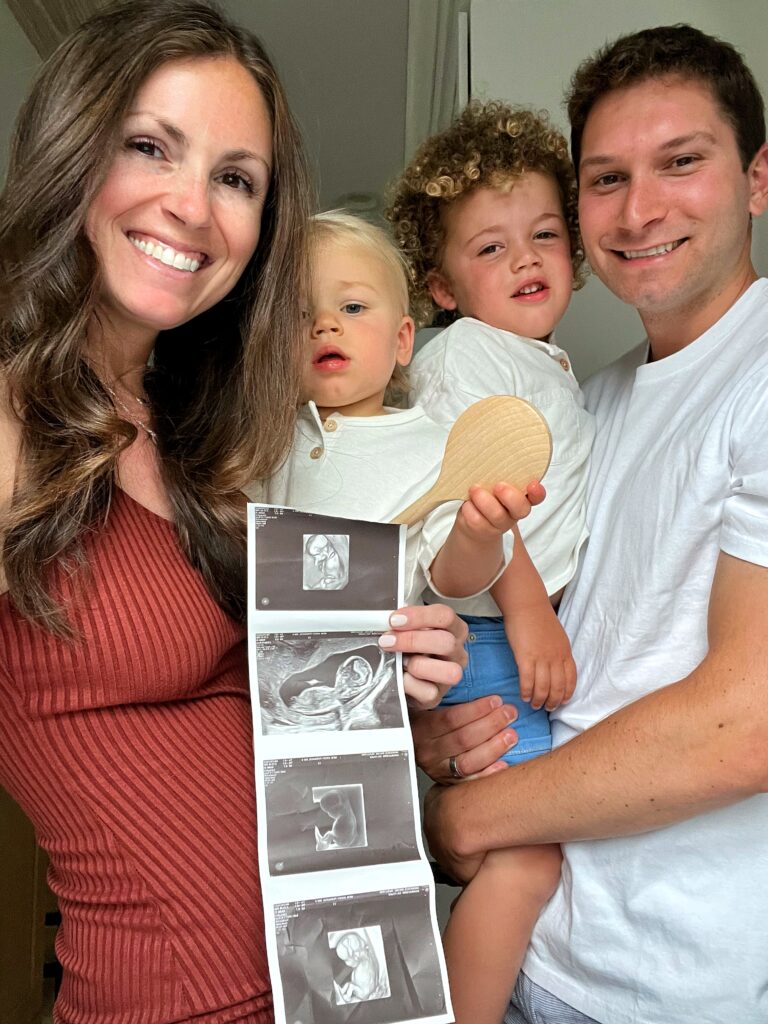 I have been keeping this a secret for what feels like an eternity. Probably because we did fertility treatment and didn’t tell anyone even our parents (besides my best friend because I can’t keep this to myself lol). And then when we got pregnant we didn’t announce on social media for awhile. We waited until 14 weeks and in the past we had shared around 10-12 weeks with Ez and B.

More on our story is also here in this podcast episode.

Okay so where do we begin..

Before Brody turned one, we knew we were going to start trying soon. And by trying, I mean head back to see Dr. Forman because he is our everything and the reason we have our two babies and one on the way. I remember sitting at dinner telling my parents that when we were going to start, we weren’t going to tell anyone. That way they knew not to bring it up or ask. When really I don’t think they even would have because my Mom thought we were wild thinking about it when B was just 12 months old.

But as I have said many of times – the baby phase just isn’t my favorite. Especially now that Ezra is 3 1/2 years old and Brody is 18 months. I see how much more fun it gets and judge me or what but the sleepless nights and endless blow outs and breastfeeding sessions are just not fun. Granted it goes by fast and it’s a blur now – I wasn’t going to voluntarily wait years until doing that again.

So when B was about 13 months, we were already 2 weeks into fertility treatment. We also didn’t think we’d get lucky again. Our treatment we do at the fertility center doesn’t have the highest success rate and I didn’t think we’d get lucky doing this method 3x and have successful pregnancies. But after 28 nights of injections and dozens of visits to Columbia Fertility Center over the month, we got pregnant.

What did our fertility treatment look like this time?

The same exact method as the last two times (Ezra’s story here and Brody’s story here). Menopur injections followed by IUI. Except Dr. Forman was a bit more conservative on the dosage of the hormones for Menopur so it took longer to grow larger follicles than it did the last two times. I had to inject my abdomen for 28 nights (well technically Jord did it for me) and go in for ultrasounds every 1-2 days. We drove into the city from our house. That is how dedicated we are to Dr. Forman. He is a magical amazing doctor and I wasn’t going to trust anyone but him.

We secretly did injections when our parents were over (if you know us well, you know my parents are over a lot). We cancelled many of plans because I did injections at 8pm and I wanted the same time each night. And during each injection, I held my gems that I call my good luck gems and they came with me for each and every appointment.

I bruised, I bled from not so cute injection angles but I knew that each injection was one closer to getting pregnant. I also had in the back of my mind that this was going to not work again on the first try. So I was mentally prepared to keep going. Which I think helped me stay positive during the month because I didn’t feel anxious or rushed to make this work. I trusted everything Dr. Forman told us to do and a few weeks of injections alter, we were ready for an IUI.

Of course the day we had to go in my mom was staying with us. And I already had to try clothes on in front of her and hide my body so she wouldn’t see my bruises. Then in the car driving my phone was hooked up to car and it said Dr. Forman was calling (she didn’t notice). But it was crazy keeping so many secrets in front of her. Then in the morning when Jord had to produce his “sample” to bring in for IUI, my mom kept coming in our room and he was in our bathroom LOL.

During those few day I kept getting weird signs that we were pregnant (I am a believer in signs!!). Like my bestie seeing geese with their babies (like I did during the 2 week wait for Ez and B). 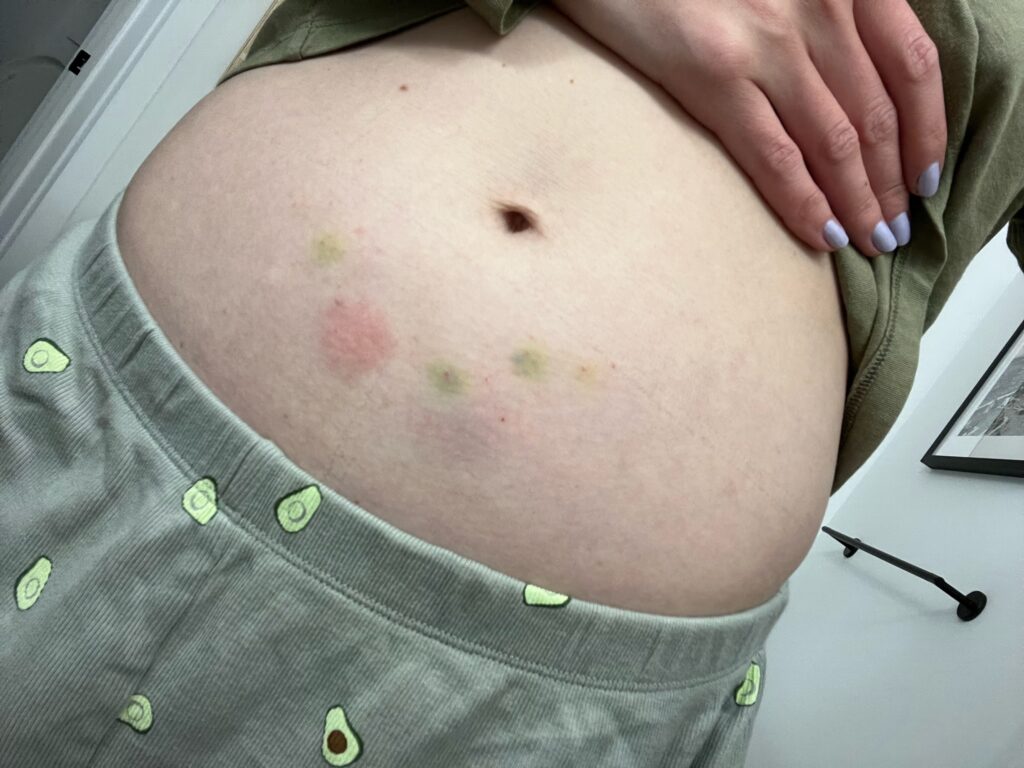 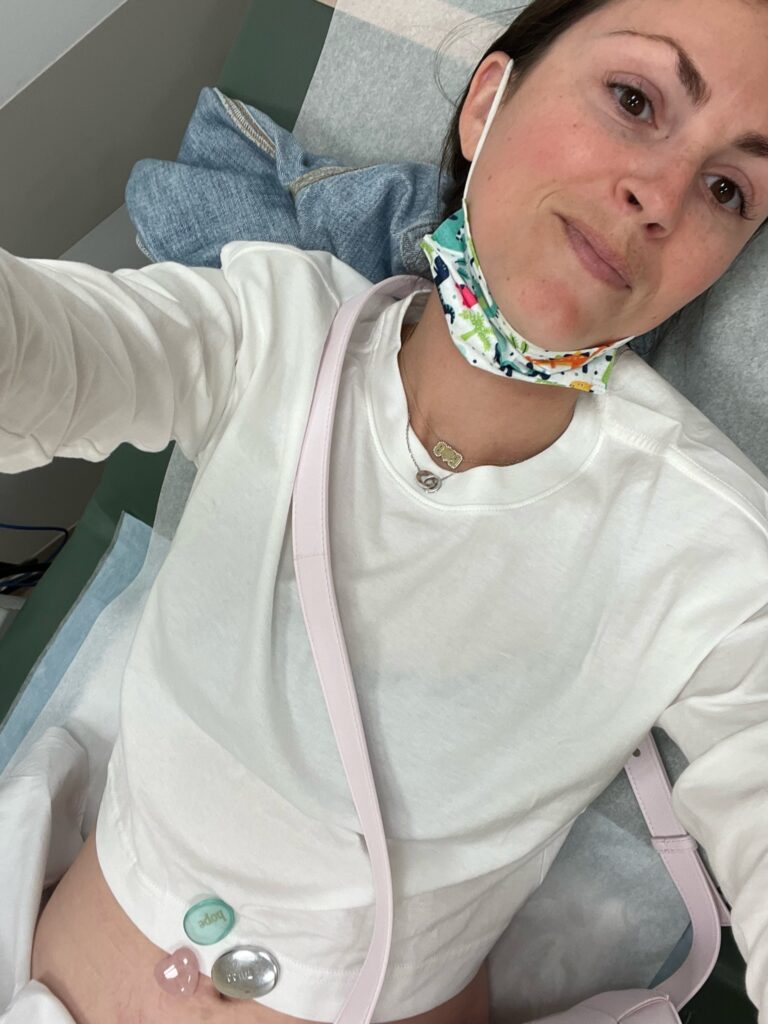 So you got pregnant, then what happened?

First I tried calling Lisa because I was freaking out and needed to tell somebody. I also had this really weird feeling that we were either pregnant with a girl or with twins because my initial symptoms were so different from Ez and Brody.

My first symptom was my boobs were really tender and sensitive (I will go more into first trimester symptoms in another blog post!). And I had a crazy craving for rotisserie chicken and my hunger was just beyond. This lasted a couple weeks and as I was chugging granola one day I said to Jordan “I wonder if we are having twins because I am just so much hungrier than before”.

TWINS?! What what what? Tell us more.. 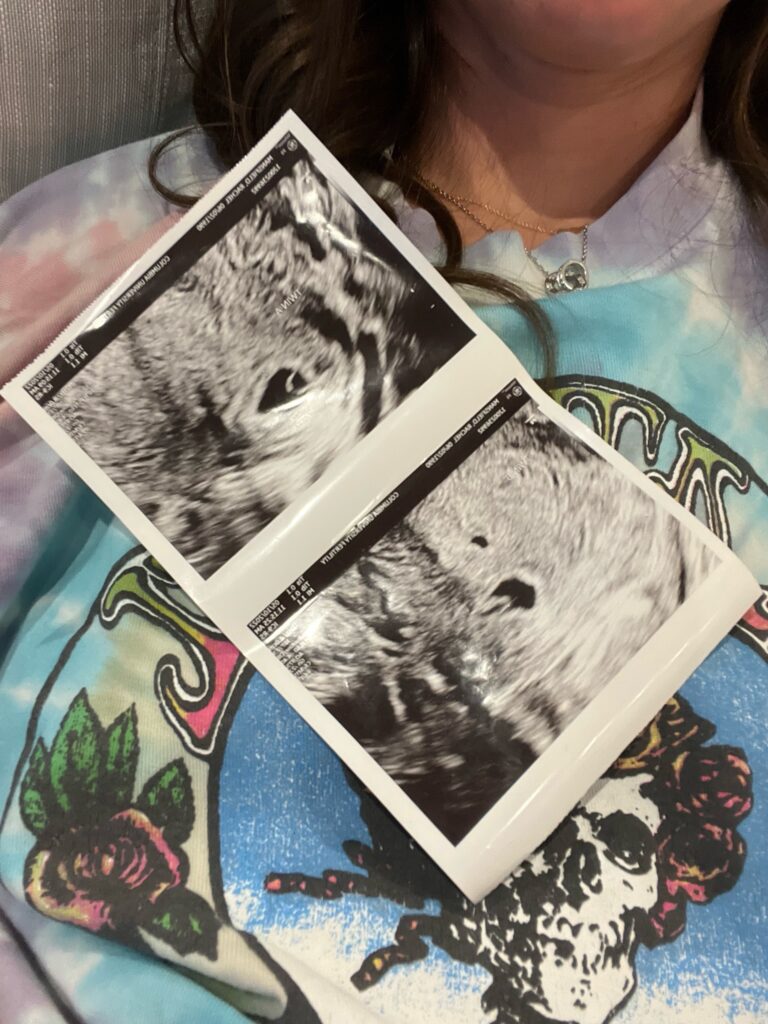 I found out we were having twins when there were two sacks showing up on the ultrasound machine. Jordan was on FaceTime because he was in the car downstairs and I ripped my mask off because I was actually breathing so heavy, I was going to faint. 4 kids, all under 4, going from 2 to 4 kids – what in the world is going on?

At that point we couldn’t tell much of a difference between twin A and B. But after a couple of visits, we saw that twin B was processing a bit slower than twin A. They were about 1 week or so behind in terms of size, milestones, etc. And my doctor did a really great job preparing me that there may be something off with twin B and to keep that in mind.

There was a lot of uncertainty going on. I remember hearing twin A and B’s heartbeats together for the first time and just melting everywhere. I thought it was the most special, amazing and beautiful feeling that two babies were growing inside me. It definitely took a toll on me energy wise and my hunger was wild and I just felt so nauseous all the time. Which, to be honest didn’t fade even after we found out twin B wasn’t with us anymore.

So what happened to twin B?

At 11 weeks I went into my OBGYN’s office for my first ultrasound outside the fertility center. This was right after we went to Vail and when we were away I told Jordan I felt like something happened to twin B. I had this crazy feeling and intuition that they didn’t make it. I was really sick and pale as a ghost the day before my birthday. Couldn’t get off the couch and had flu-like symptoms. Chills, sweats, body aches and the next day I felt better. It was really strange. And my pregnancy symptoms were still there but not as intense as they were for a few weeks.

As soon as my doctor started the scan, I looked at the screen and just knew twin B wasn’t there. I saw a black sack with a cloud-like shape inside next to a black sack with a formed baby. My heart just ached. It sunk to a level I hadn’t experienced before. I looked at Jord and saw the tears in his eyes. And the doctor confirmed we had lost twin B and there was no heartbeat. They are considered a “vanishing twin”. And most women don’t even go in for an ultrasound until 10/11 weeks so they wouldn’t have even known they were pregnant with twins. Since I did fertility meds and had monitoring from the moment I peed on a stick, I had the knowledge of what was going on. I also had the attachment, the emotion and the vision of our crazy chaotic family driving a school bus over town with 4 car seats in the back and walking around with 2 double strollers.

What is going on now? Is Twin A okay?

In my past 2 pregnancies, I did the NIPT testing at 10 weeks. This not only tells us the sex of the baby but also if there are any genetic or chromosomal abnormalities with the baby. Since we lost twin B, we aren’t able to do this test until 8 weeks post losing twin B. So we haven’t been able to do the testing yet. Which is why we also don’t know the sex of the baby at this point.

My doctor says everything looks fine with the baby right now and when I did the nuchal neck fluid scan at the perinatal center, it was an extensive hour long ultrasound. And everything looked great on there too from what we can see. So I am feeling hopeful and positive that twin A/the baby is growing on track. We will have more definitive answers in mid-august when we do the NIPT test and then around 20 weeks when we have our anatomy scan.

I don’t want to rush this pregnancy because I have a feeling 3 kids will be our number, but I’m hoping we can get some answers sooner rather than later and know what is going on.

I am so incredibly thankful and I feel so blessed for a very very feasible fertility journey. For all 3 of our babies, we got extremely lucky that my body responded to Menopur easily and IUI worked. I don’t lose sight of this at all and each time I tell our story, it makes me even more grateful for our journey. I am sending so much love and positive energy to anyone who is trying to conceive. My biggest piece of advice is really to find a doctor you love and trust. One that makes you feel unique and listens to what makes you feel comfortable. And one who is communicative and supportive. You know our obsession with Dr. Forman at this point, but I truly cannot thank google enough for bringing him into our lives. We are the luckiest and I am so happy that so many of you have also now went to Dr. Forman and have had positive experiences leading to your beautiful baby(s).