How to Make Oatmeal for Babies (so easy!)

Sharing how to make the easiest oatmeal for babies! 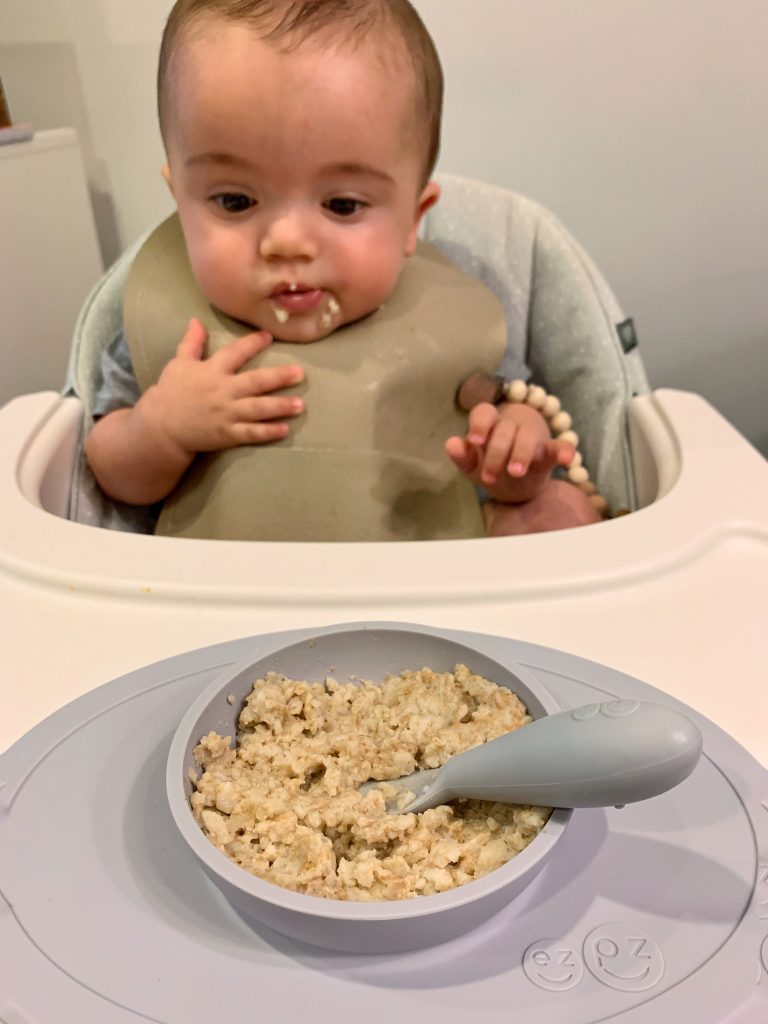 As we spoke of in this blog post, feeding your bubs food can be confusing and overwhelming for many.

I personally have had the best time making food for Ezra but I also recognize that most people’s happy place is not the kitchen like it is for me. And that is totally ok! I am here to help make this a little bit easier for anyone who is starting to give their babies food and what’s to know what the beep to do.

We all heard 100x how oatmeal is one of the first foods a baby eats. Or rice cereal or whatever. I skipped the rice cereal and to be honest, I skipped the “baby oatmeal”. I have found that a lot of baby food is pretty overrated and overpriced at times (just my opinion). There are definitely some amazing brands out there making quality products (will share more on this soon), but if there is one thing I have learned in the last few months of feeding Ez, it is that…

Crazy right? That is how I went about making oatmeal for Ezra.

I asked myself, “how would I want to eat my oatmeal?” Of course this varies based off of how you are introducing allergens, etc. but when I first gave Ez oatmeal, it wasn’t cooked in only water. I personally don’t like oatmeal just in water with no spices or mix-in’s. Why would I expect him to like it?!

I cook Ezra’s oatmeal in a non-dairy milk. Usually coconut, cashew, almond, anything with no sugar. I add in a lot of cinnamon (just how I like it) then switch up the mix-in’s everyday.

When Ezra first had oatmeal, it was just oatmeal + cinnamon + coconut milk. Yes, I took a risk at the allergy here but I wasn’t too concerned with there being a coconut or gluten allergy.

Speaking of gluten, Ezra’s oatmeal usually isn’t gluten-free either. I focus on giving him organic and non-GMO rather than allergy-friendly foods. Unless he starts having an allergy to something, I’d like to expose him to as much as possible. Plus this is how Jordan and I eat.

Ez also usually has his oatmeal in traditional oatmeal form if you will. I blended it into a pudding consistency once but when I made it again, I offered it as is and he loved it. Plus it makes the prep work a bit easier for me.

If your baby prefers the pudding consistency, just add the oatmeal you make to a blender and blend until creamy! Whatever it takes to have them enjoy their breakfast.

How much oatmeal do I give my baby? What do I put with it?

That is totally your call! I make about 2 cups per batch and usually put it in an ice cube tray to freeze.

Ezra eats one of the “cube” portions at each serving and I always mix in a nut or seed butter of sorts (love using my coconut butter too), then a splash of milk when I reheat it. I also will add a sprinkle of ground flaxseeds, chia seeds or coconut flakes for extra nutrients for him. Soon I will add granola when he is eating things with a bit more crunch to them. I usually serve it in this bowl for him.

My hope is to instill intuitive eating practices with Ez. If he isn’t interested in finishing his oatmeal, I don’t make him. He also is usually satisfied with how much I serve him too. He is getting in a habit of having it every morning after he nurses!

Some days I put the oatmeal on his tray and have him have a bit of “fun” with it if you will. He gets about 10% into his mouth this way but it does help him learn to feed himself too 🙂

Tips on making the baby oatmeal:

Hope your bubbas love this oatmeal as much as Ezra does. 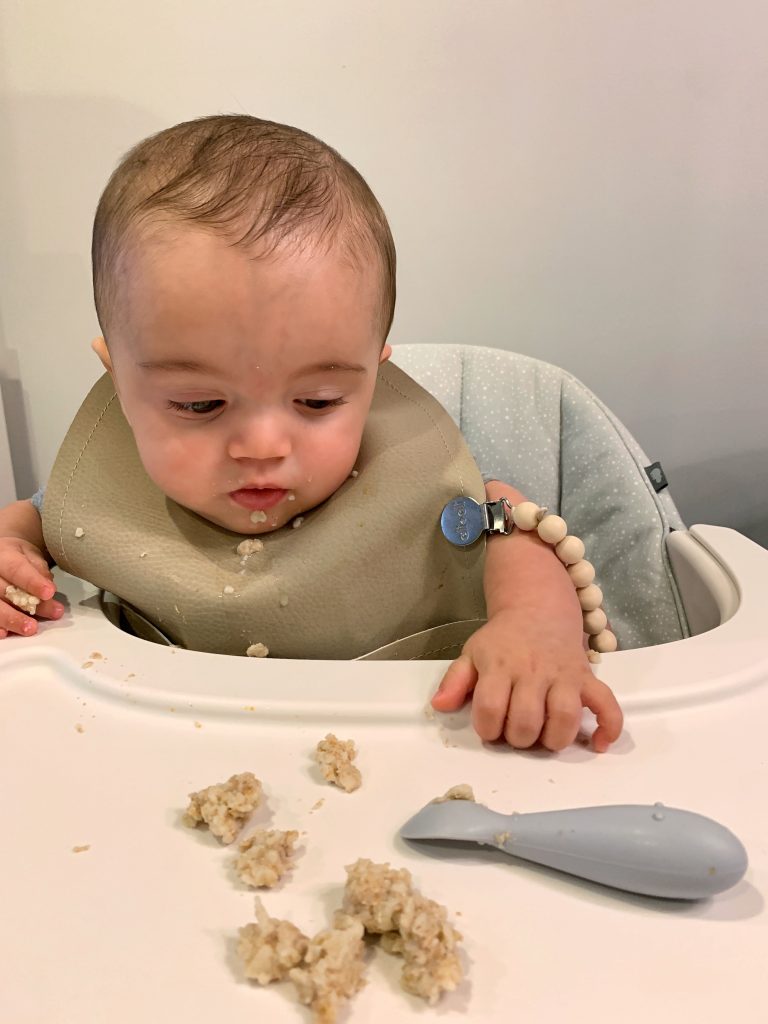 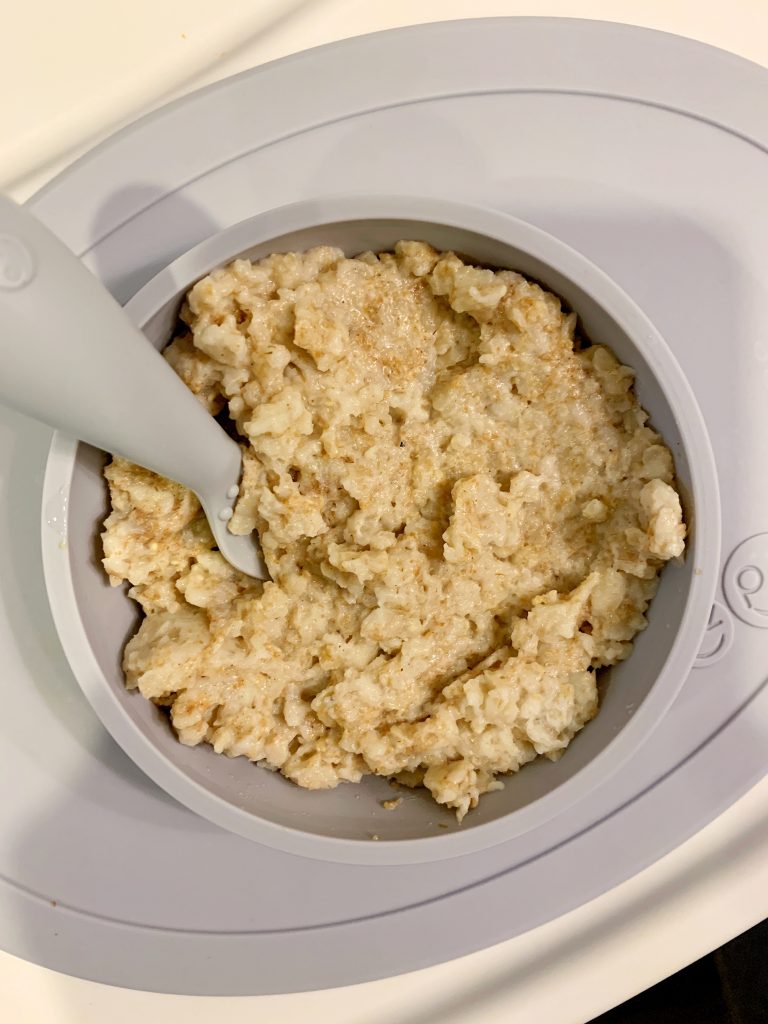 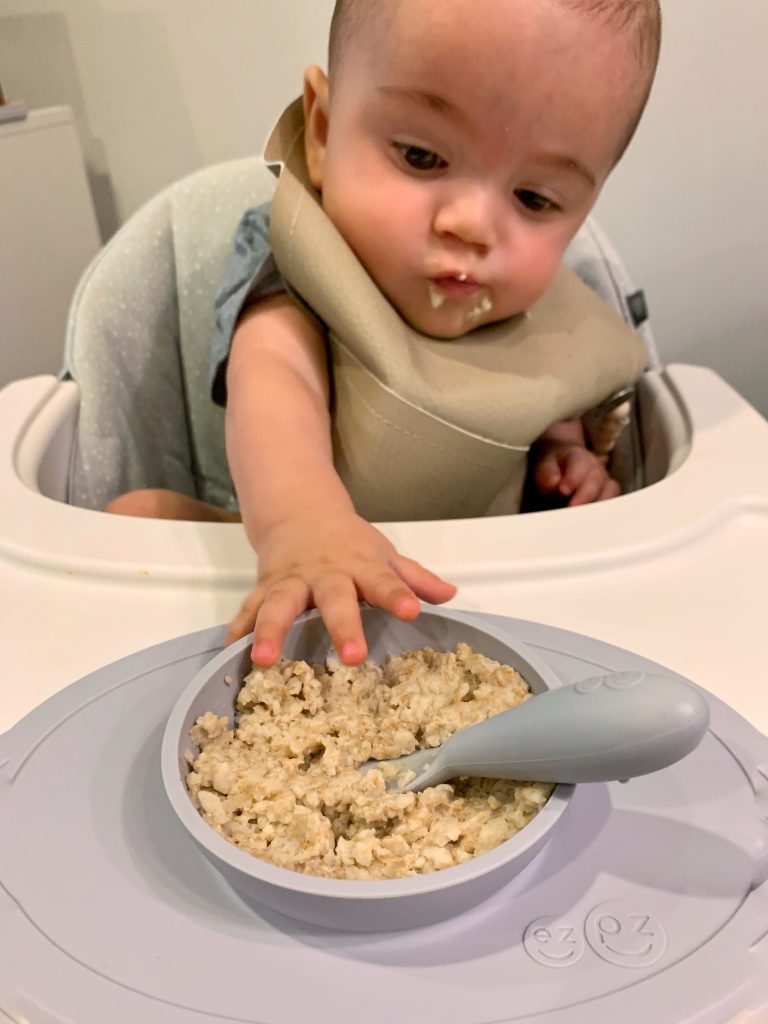